THE LABYRINTH OF MOGOR. EQUINOCTIAL LINES IN THE PREHISTORIC ROCK ART OF GALICIA 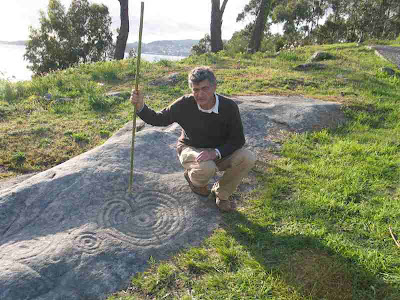 The orientation of the exit of the labyrinth of Mogor seemed to have no interest, beyond to know that points to the West in a general way. No one had considered to make a more analitic and meticulous study, maybe because there isn’t a clear and straigh corridor between the two walls where you can draw a straigh line that would define the exit. Or maybe because there is a closing made by four little quadrangular forms which prevent to enter or go out. 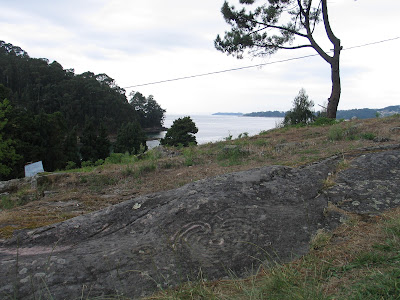 Another factor that make us think that this matter is not important is his location on the down part of mountain of Mogor.There is a projection of the beach which prevents the complete vision of the “mouth of the ria” and the excellent panoramic that we have from the higher parts of the site.

A last factor is related with the illumination because the engraving is on the East side of the rock and in the sunset it turns into the shadow inmediately. In the sunrise we have to wait until the sun is above the mountain of Mogor so it iluminates the engraving.
This photograph of the labyrinth is still unpublished in the publications of archeology. When Leo Duval asked for it, I though on the possibility that this day something more visually shocking would happen in other rock with more engravings and bigger ones.  Pedra dos Mouros is located 80 mts from the rock of the labyrint, it has 15 circles and it is an example of the best circular geometrism in a medium size.
In Pedra dos Mouros there is a clear alignment between 5 remarkable circles. Then when I put a stick in the center of the circle that is located more in the west it arised a straigh line that linked their centers. 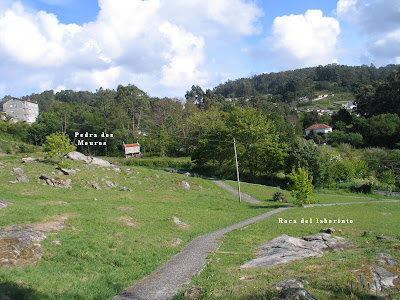 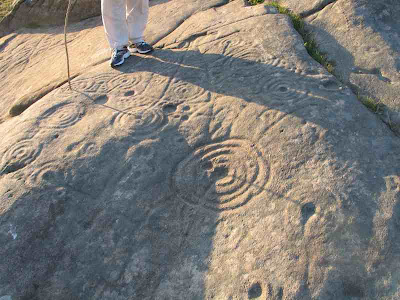 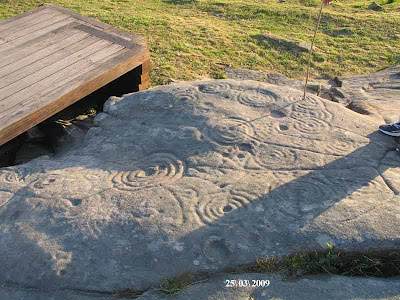 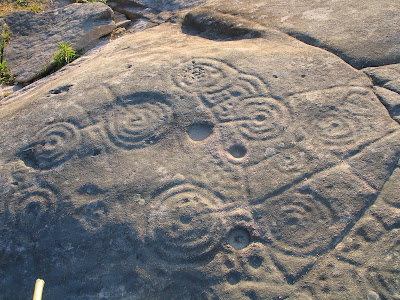 Pedra dos Mouros.   View from the East ...a face in the right?
The next day when I checked the magnificient discovery in Lombo da Costa ( Cotobade) there was an equinoctial line even more spectacular.During the month of March I got equinoctial lines in other places ; the new spread from my blog and the archeologist Pablo Novoa got them in Gargamala .
But it took a little bit of time to realize that I could search them in the labyrinth. The rock is small, it has only a few more engravings and they are not illuminated in the sunset. 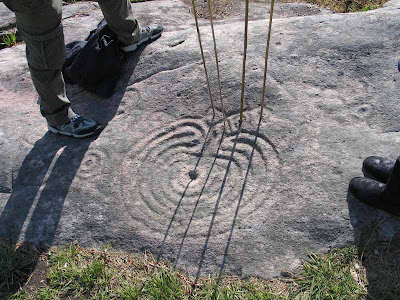 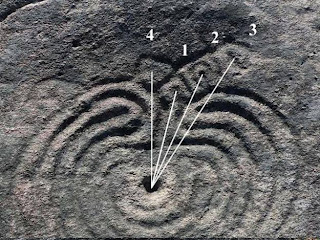 But in the structure that closes the entrance of the labyrinth, three of its four quadrangular forms ( the ones situated on the North of the exit) have a little point in its center. We already have three points where we can  put the stick. We can establish three lines of shadow  between them and the center of the labyrinth. When we do it we can see that the line that is closer to the exit (number 1) is a equinoctial line. 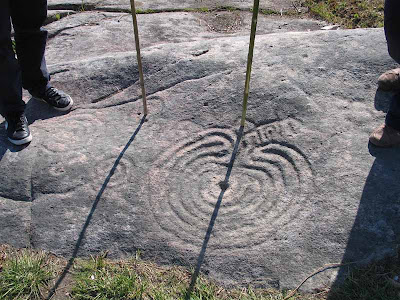 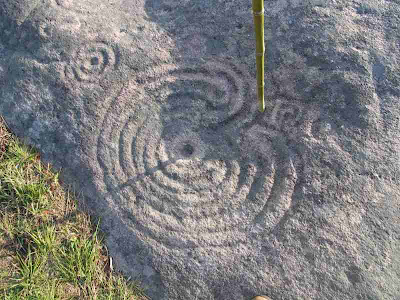 nº 1. equinocial line
We have obtained a equinoctial line that estimulates the investigation of the closing of the structure; but we still don’t know what is the orientation of the exit. If we consider the line number 4 (although in the engraving of the correspondant module is not showed the center) we can say that it is situated between the number 1 and 4.

The equinocial line projected on the landscape, shows an point in the North of the island of Ons. But a little bit more to the South there is a channel between the South of Ons Islands and Onza, a very singular place for the sunset. From the site of Mogor this point is indicated by the line of 257. Leo Dubal obtained the 23 days of difference that we have to consider in our equinox to photograph the sun in that position. 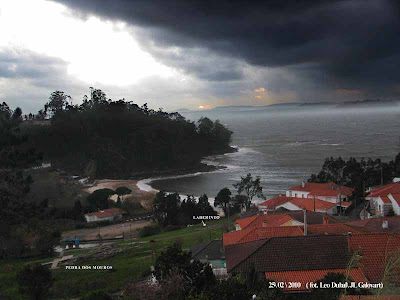 If we see how is the closing of the labyrinth and the trigonometry, they also take us to this sollution. When we design the 5 lines in the coast there are 3 visible points and 2 not visible, the visible lines will take us to the not visibles. With the lines 1,2 and 3 we get the points in the north of the Ons islands or in the coast of Portonovo and Sanxenxo; we have the possibility to compare distances visually, to measure and to relate distances and angles. Toward the South we can calculate that the line number 4 points at south of Onza which complete the map of the “ria of Pontevedra”. By proportion between distances and angles we also can determine that the exit of the labyrinth points to the channel between Onza and Ons.

A possibility is that the line of 257º has a symbolic and geographic value; in Galicia this already happens with the equinocial line. In the West coast of the Iberian Peninsula ,between  San Vicente cape and Finisterre cape the coast line has a direction S-N and the equinocial line suggest us the Atlantic 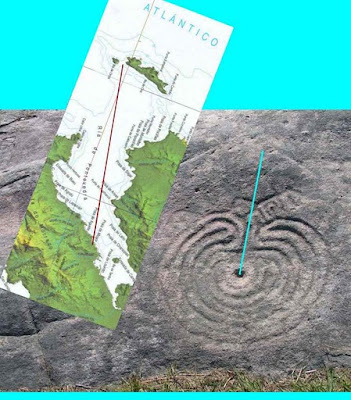 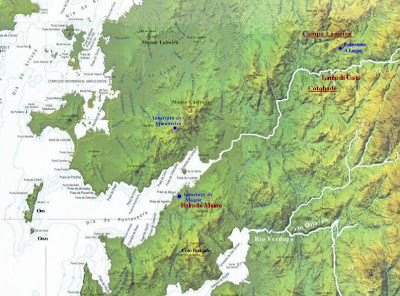 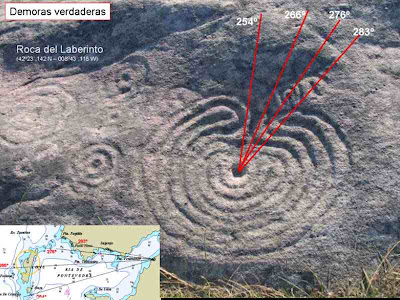 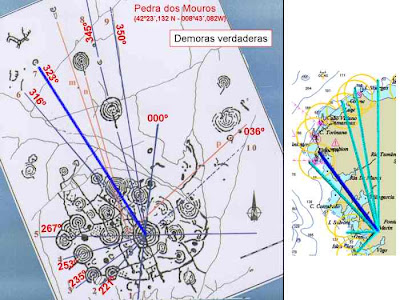 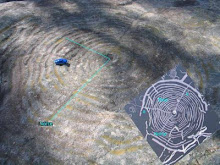 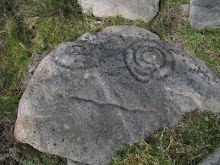 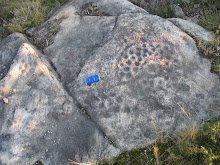